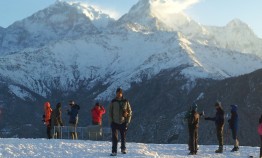 The Nepalese rupee is divided into 100 Paisa. Away from the major centres changing the larger denomination notes can be difficult at times, if you are going trekking change up some of the larger notes that you have and to keep a supply of the smaller notes for the trek.  There are plenty of ATMS in Kathmandu and Pokhara which are open 24 hrs and accept Visa and MasterCard. It is a good idea to let your bank know that you may be using your card in Nepal before you travel. Major credit cards are accepted in many establishments nowadays, restaurants and shops in Kathmandu and Pokhara and other urban centers in Nepal, there will be a levy.

There are quite a few scams aimed at tourists around Kathmandu examples of which include deals offered by gem dealers, credit card scams and low level scams. There is also some low level petty theft (though very rarely violent) in Kathmandu and other tourist areas. Normal care and vigilance should be taken to avoid these. Kathmandu is frequently the focus of political demonstrations, strikes and occasional curfews. These generally only affect transport but are best avoided.

The people in Nepal are as varied and complex as the country itself, with numerous and complex ethic divisions. It is the perfect place to experience and see a wide range of ethnic groups including the Limbu, Lepcha, Newar, Sherpa, Tamang and Gurung to name but a few. There are three main cultural zones running from East to West, the North including the high Himalaya, the Middle Hills and the Terai. Each group has adapted its nature, culture, and lifestyle to the environment. Culture as mentioned throughout this web site is embedded in Nepal, tradition flows with its rivers, art and history through its valleys and religion lies in the heart of all its people and are all part of the life of the Nepalese.
The Nepalese are friendly and hospitable by nature and travellers often consider them to be the most warm and welcoming people they have ever met. The definition of hospitality here goes far beyond what most people would imagine. You will be welcomed into homes across the country with a smile and a warm cup of tea, and leave as life long friends. Guest equals God in Nepal and the Nepalese respect Guests as God in keeping with the phrase.

Nepal covers a span of 147,181 sq kilometres ranging from an altitude of 70 meters to 8,848 meters. Around 64% of the country is covered mainly in hills with roughly a third of this being mountains, almost half of the population live on the flat plains of the Terai.  Mountains, mid hills, valleys and plains dominate the geography of the landlocked country that extends from the Himalayan range in the North to the lowlands in the south. Physical features also include green paddy terraces, wind-swept barren landscapes verging on deserts, dense forests and marshy grasslands. The country is well endowed with perennial rivers, lakes and glacial lakes that originate from the peaks of the Himalayas.  The flora and fauna in Nepal is yet another attraction for visitors, there are many rare species of rhododendron and over 6500 known species of tree, shrubs and wildflowers. Nepal over the years has established 9 national parks in addition to the three wildlife reserves and three conservation areas, around 18% of the land in Nepal is now protected.

Nepal sits right in the heart of the Himalayas, and perhaps it is not surprising that there is a huge variety of both birds and mammals due much to it's unique variety of landscapes and climatic conditions, it is in fact extremely bio-diverse.The best opportunities to see the wildlife are in the national parks, conservation areas or when trekking in the mountains.  A number of endangered and protected species are found in Nepal including The Royal Bengal Tiger, Snow Leopard, Wild Elephant, Rhino, Brown Bear, Clouded Leopard, Red Panda, Gangetic Dolphin, Wolf, Wild Yak, Pangolin, Saras Crance, and the Gharial, Pigmy Musk Deer are just a few of the many.
Over 850 species of birds are found in Nepal and many of these can be spotted in the Kathmandu Valley, in fact Nepal covers only 0.1% of the world’s surface but it is home to nearly 10% of the world’s species of birds including 72 critically endangered ones.

Nepal and in particular Kathmandu is a food lovers delight with restaurants serving dishes from all over the world. Nepalese cuisine on the other hand is quite simple and is known for being extremely healthy and nutritious as well as being somewhat basic. Nepali's make extensive use of spices and flavourings such as ginger, garlic, coriander, pepper, cumin, chillies, coriander, mustard oil, ghee and occasionally yak butter. As with most things in Nepal, the cuisine varies according to ethnic groups and castes, depending on the ingredients available. Indian, Chinese and Tibetan flavours and influences can be detected in Nepali food although Nepal’s cuisine of course maintains its own flare.
The staple diet of the population is Dal (lentils), Bhat (rice) and Tarkari (curried vegetables) and the Nepalese will eat rice and vegetables twice a day, beginning the day with a cup of tea and little else and then eating dhal bhat some time in the mid morning and then again in the evening.

&nbsp;Everest Base Camp Trek is without doubt ...

The Langtang Valley is a hidden alpine valley full of flora an ...

Sincerely, we would like to thank you for selecting us to support you regarding your needful services. Moreover, we would kindly like to inform you that your mail has been sent to the concerned department.